The Advantages of Aerial Drone Photography

Aerial drones are a fantastic way to capture video footage and photographs from a bird’s eye view quickly and easily. Aerial drones have very few limitations that will restrict them from flying or capturing the perfect shot. The only major thing that limits aerial drones from capturing the exact shot you want is objects or structures that actually obstruct the drone from flying in the correct spot.

It can be argued that Aerial pole mast photography has greater limitations than using an aerial drone… for example the time it takes to set up equipment. An aerial drone has extremely little set up time and can be in the air within seconds of getting on site. Whereas, an aerial pole mast photographer may be on site for up to an hour before they are set up enough to capture any photographs.

The aerial drone method is highly advantageous for capturing those spontaneous shots, especially in certain circumstances. For example, at weddings when the photographer needs to capture the moment and move with the bride and groom, the aerial drone is perfect for taking aerial shots. It would be impossible to capture moments of a wedding with aerial photography using an elevated mast because it would simply not be able to move quick enough.

In general, unless very specialised equipment is used with pole aerial photography, the height at which images can be captured is limited. Aerial drones can often fly higher and therefore capture more impressive photos with a larger field of view. This can be particularly useful when photographing landscapes or properties with lots of land. 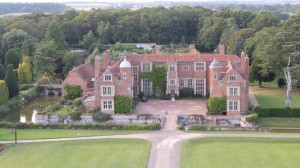 Obviously location and the immediate surroundings of the area where you wish to capture aerial photographs can play a large part and create restrictions for aerial drone photography and elevated mast aerial photography. For example any tall structures, landmarks and other objects such as trees or buildings can obstruct the view of both an aerial drone camera and an elevated pole mast. Before raising a pole mast or flying an aerial drone a risk assessment must be carried out of the surrounding area. 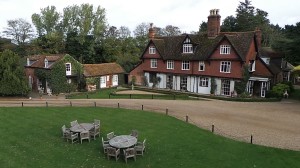 shown on the right would have been nearly impossible to capture using an aerial pole mast and if a pole had have been used it would have caused destruction of the garden and grounds at Ravenwood Hall Hotel.

In order to raise a pole mast, a vehicle of some sort, normally a van or 4×4 is needed. In order to reach the correct spot to capture a photo like the one shown, the fence would have needed to be taken down to allow a van to access the grass. However, taking a van over the neat lawn and moving it around to get the correct angle would have destroyed the lawn.

Both aerial photography and videography have a wide variety of uses and can give your business, residential sale or even your wedding photographs a unique edge.

For photographs with a brilliant twist, contact us now for more information and prices at studio@suffolkphotostudio.co.uk